MLB Network concluded their yearly series “Top 100 Players Right Now” on Tuesday night.  The full list of 100 players can be found here.  I’m shocked, but respect that they actually put Josh Willingham at #43.  The thing about baseball is that there is never an agreement on anything.  I couldn’t resist making my own “Top 20 Right Now”, starting with 20-16 today and another group of five over the next three days.

Call me a homer, especially to have Kimbrel leap over NL East rivals Stephen Strasburg, Cole Hamels, Giancarlo Stanton, and David Wright into my top 20.  However, when you look at players at their position that are purely dominant Kimbrel is at the head of the class.  Kimbrel struck out over half the batters he faced in 2012, a first for any pitcher.  He also has finished 23rd and 8th for NL MVP the last two seasons, which is better than anyone in the NL East I jumped him over.  I’m going to give the best closer in the game, the respect he deserves.  I would’ve done the same with Mariano Rivera a decade ago.

Well this will end my homerism quickly, I jump Molina up a full five spots and into the top 20 after his best season in the majors.  You can make a case that he’s the best catcher in the game right now.  I won’t go that far, but Molina’s awesomeness at throwing out potential base stealers is unparalleled and gives the Cardinals a dynamic that other teams don’t have.  Molina’s won five straight Gold Glove’s and has improved at the plate, not just behind it, hitting over .300 each of the past two seasons.  Molina finished a career-best 4th in NL MVP voting in 2012.

Our first agreement!  Sabathia has almost become underrated as the ace and work horse of the Yankees staff.  Even with an injury last year, Sabathia logged his 7th straight 200 innings pitched season.  He’s also not just eating innings, Sabathia is giving quality innings, as he hasn’t had an ERA over 3.38 since 2006.  He’s been so good for so long, that he’s being overlooked by new pitching flames like Stephen Strasburg. 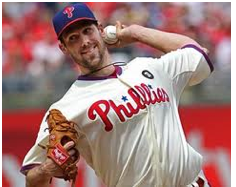 I’m such a sucker for Cliff Lee because he doesn’t walk anybody.  I think growing up watching Greg Maddux not walk anybody made me have an affinity for pitchers with great control.  Lee is the epitome of that now, he’s led the league in BB/9 three times and K/BB ratio twice, including leading the league in both in 2012.  Lee also hasn’t had an ERA over 3.18 since his breakout Cy Young season in 2008.  He’s the shining example that pitcher wins aren’t the correct barometer of pitching quality.

McCutchen moves up a spot on my list as I have him ahead of Evan Longoria and Giancarlo Stanton, but not ahead of a future player.  The other two might have more talent, but right now I think McCutchen brings the goods better than both of them.  McCutchen broke out in 2012 and finished third in the MVP voting, while taking home a Gold Glove and a Silver Slugger.  The Pirates star has developed into a true 30 HR, 25 SB, .300 BA threat that is hard to find in the game.  He’s the foundation for the Pirates to end their sub-.500 streak and I believe they will this season.

That’s the first part of my “Top 20 Right Now”.  Who would be on your list?  Let me know in the comments or hit me up on Twitter using the link below with #MapesRightNow!  Tomorrow is 15-11, featuring a player who makes a big leap from the MLB Network list!