This is a picture of the Atlanta Braves official 2013 calendar.  The current month’s picture has Martin Prado, Tim Hudson, and Brian McCann.  All of them no longer play for the Braves after Prado was traded before the 2013 season, Hudson signed with the Giants, and McCann signed with the Yankees (coincidentally the latter two IN November 2013).  Oops.

The World Baseball Classic returns for the 3rd time starting March 2nd.  Fellow blogger Jeremy Dorn gave his rankings of every team in the WBC last week.  (I haven’t figured out how he has South Korea 11th either) I wanted to delve more into team USA’s chances and how the roster stacks up.

Interesting that the deepest offensive position with three players is at catcher.  They clearly want to rotate these guys so they don’t get too banged up before the MLB season begins.  Not being able to score the defending NL MVP in Buster Posey is a tough blow to team USA, but having hitting machine and former AL MVP Joe Mauer lessens the blow.  He could even be the designated hitter option, when Arencibia or Lucroy are behind the plate.  Arencibia’s inclusion seems to coincide with R.A. Dickey’s appearance on the roster.  The two are now teammates in Toronto and have been working together to have knuckleball success.  I’m sure the Blue Jays will be pleased with them getting reps together in high pressure situations.  Lucroy had his best season at the plate last year, but was hampered by injuries.  He’ll be a solid offensive piece down the lineup.   Getting Posey on board would’ve made this an easy A, but alas.  Grade: B+

I would’ve much preferred the bat of Prince Fielder, but I have no qualms with Teixiera joining team USA for the 2nd time.  He’s not the hitter he once was, but does have pop, will provide for some interesting decisions with his switch-hitting ability, and is one of the best defensive first baseman in the game.  He’s going to get a lot of work in as the only true first baseman on the roster, but could get spelled by Mauer and maybe even Ben Zobrist.  Grade: B-

Pedroia and Kinsler are probably better hitters than Zobrist, but the Zorilla’s ability to play mulitple positions makes him a suitable choice.  I don’t think we’d see any of the other possibilities manning right field or shortstop the way Zobrist does for the Rays.  Brandon Phillips will get the majority of time at second base and the three-time Gold Glove winner will flash plenty of leather for the red, white, and blue.   The only better second baseman in the tournament is Robinson Cano for the Dominican Republic.  Grade: B+ 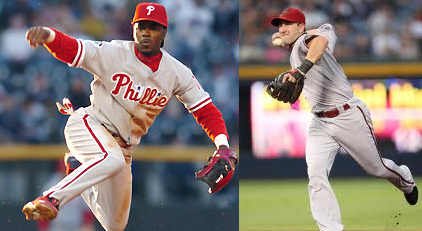 One would have to believe that Rollins is on the roster over Desmond just based on experience and leadership ability.  Jeter’s ankle may not be 100% in time for the WBC and with Tulo’s injury history it was clear he wouldn’t risk it.  Rollins is the defending NL Gold Glove winner at the position and played in the last WBC for USA.  He’s not the hitter we once was, but can provide speed atop the lineup.  Bloomquist is the questionable pick for the roster, but he’s a clear utility player and can play numerous positions in case of injury.   When compared to the players team USA could’ve had if healthy, I can’t give out a great grade.  Grade: C

This was the easiest call for team USA.  Wright is the best third baseman in America right now.  The only problem for the Stars & Stripes is that Venezuela (Miguel Cabrera) and the Dominican Republic (Adrian Beltre) have better options at the position.  Grade: A-

Now we’re getting to the good stuff.  Even without Trout and McCutchen, I love this outfield.  Braun is the best left fielder in the game and a perennial MVP candidate.  Jones is a budding superstar that helped turned the Orioles around and is one of the best defensive center fielders in the game.  Stanton is a straight masher that you can’t pitch around in middle of the lineup.  Victorino doesn’t have the name of some of the other players that aren’t playing, but his ability to play all three oufield positions, while filling in as pinch-runner and possibly designated hitter is good enough.  I know Mike Trout wanted to have a traditional spring training entering his 2nd full season, but I think that he’s going to come to regret not being around this talented group.  Grade: A

It’s pretty easy too look at those two lists and get a lump in your throat.  There is one spot still open for a starting pitcher that’d presumably would go to Verlander if he wants it.  Let’s look at what is definite right now.  Team USA sports the defending NL Cy Young winner in Dickey, who’s knuckleball will give batters fits seeing it for the first time this season.  Medlen was arguably (and I’d argue was) the best pitcher in the 2nd half last season.  When he’s on his game, he’s unhittable.  Vogelsong is a fantastic story since returning to MLB from Japan and can be useful as he might have some inside knowledge on the Japanese hitters.  Holland is a decent southpaw, great in the clubhouse, and let’s be honest we’re all secretly hoping he faces the Netherlands.  If Joe Torre has a sense of humor, it’ll happen.  It’s not the best, but it’s certainly not the worst.  Grade: B-

No offense to Tim Collins, but I’d rather have all five pitchers in the “Who’s out” list than him.  Affeldt is a great big-game pitcher as he proved in the 2012 postseason.  He’ll have to come through in big spots as the best of this bunch.  Perkins has become a solid lefty.  He’s climbed his way up the ranks to become the Twins closer.  Seeing a lot of quality lefties staying in their spring training homes is a little disheartening though.  Grade: C+

As long as the words “Heath Bell in a high pressure situation” aren’t used I really like the bullpen that Greg Maddux has to work with.  Craig Kimbrel is the best relief pitcher in the world right now and should lock down any game in the 9th inning.  Perez and Pestano work well together in Cleveland.  Boggs was a revelation in St. Louis this past season.  Cishek will be a change of pace reliever with his submarine delivery.  Cishek did really well filling in as the Marlins closer when Heath Bell fell apart last season.  Gregerson is one of the leagues most underrated relievers because he pitches in San Diego and has never had an ERA over 3.24 in his four seasons.  Having Kimbrel on the roster is such a boon for this bullpen.  Grade: A-

Final Thoughts: Team USA will have a real shot at knocking Japan off the top of the WBC mountain.  The coaching staff with Joe Torre, Greg Maddux, Dale Murphy, Gerald Perry, Larry Bowa, Willie Randolph, and Marcel Lachemann is top notch.  The only real question marks are at shortstop and left-handed pitching to me.  I believe that if the starters can get a lead to the bullpen though, USA will be dangerous.  I expect at least another run to the semi-finals and a trip to San Francisco.  Every team at that level is so talented, it’s going to come down to the little things to decide the champion.