3U3D alluded to the Marlins fire sale possibilities on July 23rd, then again on July 25th, but it wasn’t really there yet.  They had kept everyone they signed in the offseason on the team…so far.  Then a little fuel was added to the fire sale with Heath Bell being sent to the Diamondbacks on October 20th.  Tonight, the hot stove and fire sale was set ablaze with a blockbuster deal that ends an era in Miami before it even begins and put the Blue Jays in the thick of the AL East, making it officially the toughest division in baseball.  Let’s take a look at the trade that’s going down.

The first thought that comes to mind is wow.  Look at all of that talent that is heading north of the border.  The Blue Jays have decided to take on a ton of money (up to $165 million) in order to try and compete in the A.L. East.  The speed throughout the order with Reyes, Bonifacio, and Rajai Davis will be the best in the American League.  Buehrle and Johnson instantly become the best pitchers in Toronto and can provided veteran leadership for Brandon Morrow and Ricky Romero.  Romero will need it after the 2nd half he had in 2012.  The Blue Jays also shed Escobar who needed a fresh start after the unfortunate, gay slur incident.  I do find it interesting that the Jays brought in John Buck in the deal.  The Jays have J.P. Arencibia behind the plate starting and top prospect Travis d’Arnaud looking for his opportunity in AAA.  It almost makes me believe that one of those three could get moved in another move to get more pitching help.  Pure speculation though.

What do the Marlins get out of this?  Well obviously more PR woes and grief that they may have fleeced the city into a new stadium, while not providing a competitive team.  Not to mention the continued outcry for owner Jeffrey Loria to sell the team.  Miami basically stole the Red Sox reset button and brought it to little Havana.  They’ve undone everything that they did in the offseason and then some.  Escobar is a good, but not great player.  Alvarez showed some promise in 2011, but took a step back last season.  He’s still young (turns 23 early in the 2013 season) and more importantly to the Marlins, affordable.  We’ve seen pitchers turn it around in the N.L. maybe Henderson Alvarez is next.  Of the prospects, Marisnick is the most intriguing. He’s ranked as the #32 best prospect in MLB by ESPN’s Keith Law.  Nicolino was the best left-handed pitching prospect in the Jays system.   Hechevarria could replace Escobar at shortstop in the near future and was ranked by MLB.com as the 7th best prospect for Toronto.

What does Miami do next?  There are rumors that Giancarlo Stanton could be next on the block, with Stanton even saying on Twitter that he was pissed off at the situation.  Fans for every team are already comtemplating trades to get the slugger on their team.  Time will tell if the fire sale rages on in Miami. 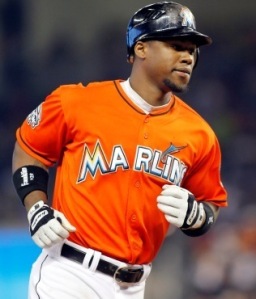 Last night, I was totally excited to go to bed and get a full night’s sleep for the first time all week. And then right as my night was winding down…*Buzz*. Dodgers acquire Hanley Ramirez from the Marlins.

I nearly fell out of my seat. As a Dodger fan, this was the news I’d been waiting to hear for weeks – finally, another bat to complement Matt Kemp and Andre Ethier in the middle of our lineup (Ramires is hitting .245 with 14 homers and 47 RBI so far)! And to think, the Dodgers only gave up a high-ceiling starter in Nathan Eovaldi and a decent Single-A reliever, Scott McGogh.

Not only that, but the Marlins threw in lefty specialist Randy Choate, something the Dodgers also sorely needed. Despite Scott Elbert’s (the lone lefty in the Dodgers ‘pen before the trade) solid season, left-handed hitters were very successful against him this year.

Coming into this trade deadline period, I was adamant that the Dodgers improve on at least three of these five areas: left field, first base, third base, lefty relievers, starting rotation. In one trade, they scratched two of those off the list, and are still in talks to acquire an outfielder from the Phillies (they are closely eyeing Shane Victorino and Hunter Pence) and trying to finalize a deal with the Cubs for starter Ryan Dempster.

Is this the trade that will push the Dodgers back to first place in the NL West? Does this lock down a playoff spot for a squad that had more ups and downs than Space Mountain?

Time will tell. But on paper, the trade looks like a complete steal for Los Angeles.

It’s understandable that the Fish wanted to unload Ramirez. He was unhappy from day one with moving to third base to make room for Jose Reyes at shortstop. He’s had his attitude problems in the past, and is currently recovering from a hand injury he sustained from punching a fan out of frustration.

Well, I’d be frustrated too if my team wasn’t playing up to expectations. Ramirez should be ready to play and fully recovered here soon, and he’s coming to a much better team environment than he left in Miami.

The Dodgers manager, Don Mattingly, is the polar opposite of Ozzie Guillen. Mattingly is calm and collected and knows how to lead a team through turbulence. Additionally, Ramirez will learn from stand-up veterans like Matt Kemp, Andre Ethier, Bobby Abreu, etc.

All signs point to this being a fantastic trade for the Dodgers. Ramirez won’t even get a chance to be a prima donna in this clubhouse, and the additional bat in the middle of the lineup has to strike fear into opposing teams. A 3-4-5 of Kemp, Ethier and Ramirez is one of the best in all of baseball now.

Let us not forget who the Marlins got in this deal. Despite struggling a bit of late, Eovaldi is a big, hard-throwing right hander who has shown flashes of brilliance at the big league level already. He hits 97 on the gun regularly, has a pretty good curveball, and is developing a change-up to go with it. Also, Eovaldi is just 22 years old –  plenty of time to grow.

In the last two days, the Marlins have acquired two big, right-handed starting pitching prospects and a host of other lower-level minor league guys. But, they’ve traded half their infield and one of their established starters. Anyone who thinks this team is not in fire sale mode, needs to lay off the booze.

There is no doubt that the Dodgers won this trade. That’s how it was designed. L.A. gets an impact bat for NOW, Miami gets some building blocks for the future. But the real question is, how would you grade this trade by the Dodgers?

Take into account that they didn’t have to give up prized prospect Zach Lee, but they took on Hanley’s entire contract, and vote in the poll below!