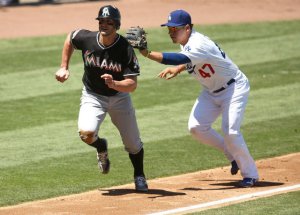 A lot can happen throughout a 162-game baseball season. Records are broken, injuries happen, walk-offs occur…you get the picture. And every single year, some of the better young players in baseball sneak by the conscious of a casual sports fan, until they explode on to the scene a year later and you find yourself dazed and confused, saying “Who is THAT and where did he come from?”

Good thing you have us, then. Because at Three Up, Three Down, we eat, sleep and drink baseball as if our lives depend on it. And we keep such a close eye on all the MLB goings-on, that we know right now who those “you don’t know me but you will” kind of guys are.

With that in mind, here is our National League version of the All-Unknown team – one stud you probably haven’t heard of yet, at each position:

Rosario is a candidate for NL Rookie of the Year, and you can see by that slash line exactly why. He has made Ramon Hernandez an afterthought in Colorado, and if his power grows with his age, watch out.

Rosario’s teammate Pacheco can play both corner infield positions (actually, he’s an awful fielder but he has experience at both spots at least), but he’s in the bigs for his bat. The 26-year-old’s power hasn’t fully developed, but that average is pretty.

Standing 5’7″ and weighing 150 pounds, it’s a small miracle that Amarista has muscled five homers this year. But this spark plug plays every, and I mean every position for the Padres and is a great defender at all of them. He could become an ideal top of the order guy for years to come.

Cruz got the call-up in early July and has done nothing but rake since joining the big league team. His defense is spectacular (.987 fielding percentage over his career at shortstop, 3rd base and 2nd base), and his bat is coming along nicely.

Is this the all-Rockies team? No. I promise. I don’t even like the Rockies. But that doesn’t make the fact that the guys who are replacing injured stars (Troy Tulowitzki in this case) are killing it, any less true. Rutledge has been told he’ll move to second base permanently when Tulo returns.

I really wanted to put the Cubs’ Brett Jackson up here, but a couple weeks’ worth of games is not enough to justify a spot on the team. Colvin on the other hand, should be known to fans by now. He has raked in Chicago and Colorado, just never consistently enough to start regularly. Just give it another season or so.

The Fish may have stumbled across their future leadoff hitter by virtue of trading for this former Rays’ prospect. Ruggiano has been ridiculous in half a season this year and is so athletic that I doubt he’ll regress much.

Yes, I know. The big, bad rookie outfielders for the Nationals are Bryce Harper and Steve Lombardozzi. Well, don’t forget about Tyler Moore. The kid has a great swing and will start tearing it up once he gets a shot at starting every day.

Keep in mind that those numbers, though they may pale in comparison to other young guns like Mike Fiers and Wade Miley, are possibly the best in the Astros’ rotation. No offensive support, average defense behind him – Harrell has a chance to be good, people.

This was the best rookie I could find who is putting up solid relief numbers that everyone didn’t already know about. And Horst is a lefty specialist to a tee. The Phils have counted on him to bail them out of big spots all year, and Horst has delivered.

You’ll thank us when these guys become rich and famous and awesome in the next few years. Did we forget anyone? Snub your team’s young star? Let us know in the comments below, but remember it’s unknown players. So don’t yell at us for omitting someone like Todd Frazier or Matt Harvey. Thanks!