In the spirit of March Madness getting its big start today, I figured I’d throw together a seeded bracket in the same vein, only to determine who would win a one-game playoff between the National League teams. I know, stupid to just base it on one game in baseball, right? RIGHT, BUD? Don’t even get me started on that extra Wild Card spot.

But anyway, I chose the N.L. because it’s easiest to format, honestly. Making a bracket for 16 teams is a hell of a lot easier than 14 or 30. Not to mention, the senior circuit seems a lot more wide open to me in 2012. Picking a Final Four in the A.L. of Texas, Boston, New York and Los Angeles would have bored you half to death.

So, here are my only rules: One game. Every team’s ace can pitch any game. Highest seed gets home field advantage. Simple enough, right?

Based on the overall seeds, we’re looking at a bracket like this:

In the first round, I have all the number one seeds moving on. The toughest matchup will be Matt Garza and the Cubs against the D’Backs, but I think the timely, young Arizona offense will rally behind Ian Kennedy and get a tight win. Chris Carpenter for St. Louis, Roy Halladay for Philadelphia and Yovani Gallardo get the jobs done easily in the other three 1/4 match ups. The 2/3’s get a bit trickier. The only three seed I eventually push through is the Dodgers behind reigning Cy Young winner Clayton Kershaw, over the very scary Washington Nationals. The Giants squeak by the Braves behind Tim Lincecum. Mat Latos and the Reds, and Josh Johnson and the Marlins respectively pass their somewhat easier tests.

Going into the elite eight, the bracket changes to reflect just one of the top eight seeds knocked out. I guess that’s what good pitching gets you in this league: 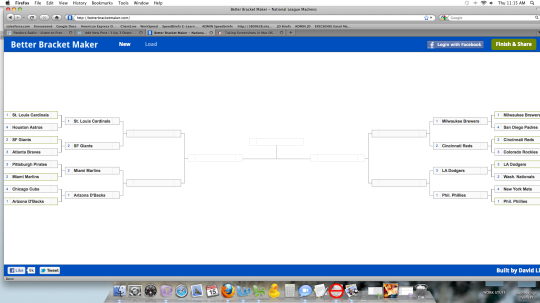 In this round, things get really interesting. Two number one seeds get knocked off in my bracket, but they are all going to be insane games. As this hypothetical playoff stands, we have Kershaw vs. Halladay and Carpenter vs. Lincecum for the right to go to the Final Four. And that’s just half the games! Call me biased, but I’ll take the Dodgers to move on as a number three seed behind that electric left arm of Kershaw and a healthy, Matt Kemp-led offense. Especially when you can’t count on half the Philly lineup to even be healthy. I’ve also got St. Louis taking it over San Francisco because while the aces are comparable, the Giants simply cannot match the trio of Lance Berkman, Matt Holliday and Carlos Beltran in the heart of the lineup. In the other two games, give me Milwaukee out-slugging the Reds and Miami handling Arizona quite easily.

Now things are getting real. Four teams. One goal. To be my fake one-game-at-a-time, National League Madness champion. Here’s the bracket after two rounds:

This bracket intrigues me a lot. We have the defending World Series champions and their super clutch ace in Carpenter, taking on a new-look Marlins team that made the biggest offseason splash of any team. Then on the National League side, reigning Cy Young winner Kershaw will again take the mound, against a much better offense than he saw in either of the first two rounds. An offense that includes the 2011 MVP, Ryan Braun. Let’s just go ahead and let this blog determine who was the real, most deserving MVP last year: Braun or Kemp. I have the Marlins taking out the Cards in a close one. I’d imagine a Johnson vs. Carpenter melee would finish in a 3-2 or 2-1 game, despite powerful bats in both lineups. Giancarlo Stanton is the difference in this one, hitting a late-inning home run to send Miami to the very esteemed Championship Game. And call me biased all you want, but Kershaw is the best pitcher in the National League, hands down. That being said, the Dodgers move on to the Championship behind another big outing by the lefty, winning by a somewhat low-scoring two-run margin over Milwaukee and Gallardo.

So, the bracket is all but complete. Two teams have withstood the test of time and advanced to the Promised Land. Check it out after the Final Four:

The Championship Game is crazy. I’m talking Josh Johnson and Clayton Kershaw trading zeroes for the first six innings. Plays at the plate, diving catches, bunt plays and steals; everything we love about baseball. In the end, Kemp singles in the eighth, steals second, and comes in to score on an Andre Ethier double. The solid pen for Los Angeles comes in to save the day, and the Dodgers don’t even have to worry about facing Heath Bell of the Marlins. Naturally, Kershaw wins the tournament MVP. And just like that, the confetti falls, I cry, and the Dodgers are…the fifth seed in the real playoffs? I can only hope.

The full, completed bracket is revealed:

*Note: This does not reflect my real predictions for the 2012 season. But damn, that was fun. On behalf of all of us here at Three Up, Three Down…Enjoy March Madness!*