The 2013 MLB All-Star Game is 83 days away, but never fear you can start voting for your favorite players today here.  You get 25 votes that gets bumped up to 35 if you log in with your MLB.com account.  Of course there are still paper ballots that can be found at every stadium and the MLB Fan Cave for you to fill out.  While I don’t fill out mine until I get a better grasp of who deserves it (like that ends up mattering) here’s what my ballot would look like on April 24th.

American League: Chris Davis, Baltimore Orioles Davis is off to a hot start for Baltimore. He’s hitting .382 with an AL-leading 7 home runs coming into the games on the 24th.  Mike Napoli and Prince Fielder have cases and Napoli would be my pick if he was on the ballot at catcher, not first base. (Runner-up: Prince Fielder, Tigers)

National League: Joey Votto, Cincinnati Reds The power numbers aren’t there, but Votto-matic is automatic at getting on base leading the league with 26 walks so far and a crazy .485 OBP.  The next highest walk total is 16 by David Wright. (Runner-up Adrian Gonzalez, Dodgers)

National League: Brandon Phillips, Cincinnati Reds It must be nice for Phillips to just get to drive in OBP-machines Joey Votto and Shin-Soo Choo getting on base ahead of him all the time.  He leads NL second baseman in RBI and is tied for the lead in home runs.  Plus, he’s the best defender at the position in the league. (Runner-up Daniel Murphy, Mets)

National League: Troy Tulowitzki, Colorado Rockies Why have the Rockies been surprising in 2013?  A healthy and hitting Troy Tulowitzki is a big part of it. He leads NL shortstops in home runs, RBI, and runs, while hitting .292. (Runner-up: Jean Segura, Milwaukee Brewers)

American League: Miguel Cabrera, Detroit Tigers The defending AL MVP is off to a quiet start, but is still among the league leaders in hits and is best among AL third sackers in batting average. (Runner-up: Evan Longoria, Rays)

National League: David Wright, New York Mets I really wanted to have NL batting leader Chris Johnson here, but Wright has had the overall better start to the season, especially on the basepaths.  There’s a lot of depth here right now with Todd Frazier, Pablo Sandoval, and Martin Prado off to solid starts.  (Runner-up: Chris Johnson)

American League: J.P. Arencibia, Toronto Blue Jays Napoli not being on the ballot at catcher is Arencibia’s gain for now.  He leads the American League in home runs with eight after another one on Wednesday.  He’s my least likely from here to be on my actual ballot in a couple months.  (Runner-up: Carlos Santana, Indians) 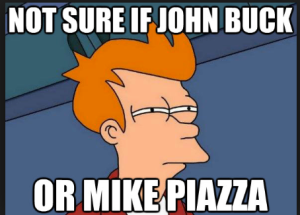 National League: Justin Upton, Atlanta Braves, Carlos Gonzalez, Colorado Rockies, and Bryce Harper, Washington Nationals There is a ton of depth at National League outfield right now.  You could take the next four on my list and make a case they deserve it on to the squad.  Justin Upton has been hands-down the best hitter in the game so far this season, it’s ridiculous that he’s still on pace for 90+ home runs. (Runners-up: Shin-Soo Choo, Reds, Dexter Fowler, Rockies, Ryan Braun, Brewers, and Andrew McCutchen, Pirates)

Who would you have on your All-Star ballot on release day?  Let us know in the comments!