Update (4/12/13): Greinke is out for approximately eight weeks. Quentin has been suspended for eight games, Hairston, Jr. for one game. Both of those players have appealed.

This blog has already morphed and transformed 100 different times tonight as more and more details are released about the ridiculous brawl at Petco Park. We have embedded videos from sources like MLB and ESPN to give you a clear timeline of what went down. Enjoy the madness, and vote in the polls below!

Bottom of the 6th inning:

Carlos Quentin, leading off the 6th for the Padres (who were down 2-1 at the time), took the count to 3-2 against Zack Greinke. That next pitch got away inside and nailed Quentin on the elbow, at which point he charged the mound. You can see the fight in its entirety here:

As many Tweeters reminded us, Quentin routinely leads the league in hit by pitches:

Carlos Quentin has been hit by 97 pitches since beginning of 2008, most in MLB

These things happen when a batter crowds the plate and takes away the pitcher’s inside corner. And it doesn’t help that Quentin clearly has no idea how to get out of the way of an inside pitch (from the first game of the series on Tuesday):

As you see in the video of the brawl, Quentin and Greinke collided shoulder-to-shoulder, and the 50-pound advantage of the batter definitely took its toll on the smaller pitcher. The benches cleared as Dodgers catcher A.J. Ellis tackled Quentin to the ground. Many people thought Greinke may have yelled something to Quentin after the beaning, which this ESPN video shows is true (embedding ESPN videos does not work on WordPress):

My expert lip-reading abilities tell me that Greinke said something along the lines of “F— off.” Hardly grounds for a rage-induced attack on Quentin’s part. For all I know, Greinke may just have been tired of Quentin’s act, as a fellow NL West pitcher became last season:

Last August, #SFGiants pitcher Vogelsong criticized #Padres Quentin for being “pissed” about an inside pitch. Called the reaction “tired.”

Vogelsong on Quentin last yr: “The guy hammers balls over the plate and then gets pissed when you throw them inside.” csnbayarea.com/blog/andrew-ba…

Before we go any farther, let me bring you back a few years…

Different teams, a different division, in a different league; same matchup. In Greinke’s 2009 Cy Young year with the Kansas City Royals, he beaned then-White Sox Quentin in the 4th inning of an early-season game. Quentin took a step toward Greinke before being cooled off and taking first base.

After that outing (the Royals won 2-0), Greinke said it was an accident, and even mentioned that he was “scared” for Quentin at first, thinking it might hit his head:

“He had a reason for [being upset],” said Greinke of Quentin. “Any time you throw it that high, it’s justified. You’ve got to be better than that and not pitch like that. You’re going to make mistakes, but the last thing you want to do is hit someone where it could seriously hurt them. As soon as I let go of it, I was scared for him.”

So there was history. Whether or not it was intentional then, or intentional this year, is a matter we can likely never pinpoint. But in both instances, Greinke held a slim lead–hardly a situation in which you want to put anyone on base purposely.

Unless Quentin slapped Greinke’s mother years ago for some unknown reason, there is no motive for Greinke to throw at Quentin in the first place. Not to mention, that little dust-up was four years ago now. That’s a long, long time for someone to hold a grudge in sports.

Okay, memory lane was fun. Let’s bring it back to present day…

Halfway through the brawl:

In the video of the fight, you can see Matt Kemp going absolutely bonkers in the scrum (kerfuffle, if you will). At one point, he had multiple teammates restraining him after getting in a face-to-face shouting match with Padres manager Bud Black.

After it looked like the dust had settled, Dodgers utility man Jerry Hairston, Jr. took off toward the Padres dugout with his finger pointed at someone. If Don Mattingly’s postgame comments are any indication, the Padre in question was backup catcher John Baker, who was raised in my hometown of Walnut Creek, CA and does not seem the type to be involved.

But as Hairston, Jr. tweeted later, he was going at the Padres because he saw a player making fun of Greinke:

Losing Zack stings, but we ll pick each other up. Zacks like my little brother. Saw someone making fun of him being injured.Not cool!!

Finally, the skirmish ended and Greinke was walked off the field by head trainer Sue Falsone. The umpires eventually ejected the pitcher, along with Quentin, Kemp, and Hairston, Jr. Shortly thereafter, Chris Capuano relieved Greinke on the bump for Los Angeles, and promptly allowed a game-tying single.

Though the unlikeliest of heroes, Juan Uribe, went deep later to help seal a 3-2 victory for the Dodgers, nothing could take the sting out of the news that broke after the game.

As soon as the game ended, fans demanded answers. Mattingly was happy to give them his, with multiple microphones stuck in his face. But first, the Dodgers got awful news regarding their $147 million pitcher:

According to Yahoo’s Jeff Passan, who is by no means a medical expert but does his research very thoroughly, the Dodgers can expect to miss Greinke for at least six weeks:

Broken collarbone is usually a 6-to-8-week recovery. So looks like a June-or-so return for Zack Greinke.

So needless to say, Mattingly was upset with the result of everything except the win. When pressed about the incident, Mattingly referred to Quentin as an “idiot” who has “zero understanding of the game of baseball,” given the situation in which he charged the mound.

Most shockingly, the skipper also declared that Quentin deserved to be suspended for as long as Greinke was on the shelf. Many writers on Twitter agreed with this sentiment, and yours truly can’t argue the idea. Of course, Quentin won’t get a lengthy suspension. Chances are, he’ll be looking at a four or five game suspension at the most. But we will have to wait and see what kind of action the league decides to take, and also to see if they discipline Kemp for his actions.

As if Quentin needed anyone else against him, A.J. Ellis told Dylan Hernandez of the L.A. Times that a few Padres apologized to him on their teammate’s behalf:

We also have the video of Quentin’s postgame chat with reporters here, which is full of blame deflections and question avoidance. Black, Quentin’s manager, said the history between the two players did play a part in the brawl. Greinke responded with some comments of his own, insisting he didn’t mean to hit Quentin and never has in the past. Plus, additional notes from Mattingly on the injury at the beginning of the video:

After cooling off, you’d think the situation would be put to rest. Alas, this night got crazier…

In the clubhouse tunnel:

Kemp couldn’t let the issue go, and stayed extremely fired up at Quentin for injuring Greinke. He went after Quentin by the player’s exit, reportedly asking why he charged the mound and ended up injuring Kemp’s teammate:

Kemp and Quentin face to face in the hallway.

As Quentin walked into the parking lot, Kemp told him, “We’ll see, bitch.”

The Associated Press was able to snag a picture of the two players arguing (see below) before they were separated. The scene could have gotten much uglier, but it was luckily diffused in time. On one hand, you have to admire Kemp’s willingness to defend his pitcher and not back down from what he considered a threat. Leadership like that can pull a team closer together. 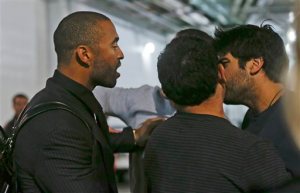 But on the other hand, the last person the Dodgers need getting suspended or playing upset is Kemp. The star center fielder is already struggling with the bat so far in 2013, and needs to recognize the difference between playing hard and playing pissed.

At the end of the night, Dodgers shortstop Hanley Ramirez (who was injured in the World Baseball Classic and has been on the DL all season) tweeted a slight silver lining, apparently in an attempt to calm the angry hordes:

So the Dodgers won the game, the series, and a bit of hope from Ramirez. But losing Greinke is a huge blow for the Dodgers pitching staff, who will likely replace him with either Ted Lilly or Chris Capuano–both massive downgrades. San Diego and Los Angeles reconvene at Dodger Stadium for a three-game set on Monday, prompting the Dodgers official Twitter account to put out this gem after the game:

See you on Monday in Los Angeles: twitter.com/Dodgers/status…

At the very least, that series will be under an intense microscope by fans, players and journalists everywhere. For the Padres, a chance to be relevant. For the Dodgers, a chance to prove that they are more than a rich all-star team–that they can win with talent and heart and team chemistry.

Stay tuned to Three Up, Three Down for more coverage as the news continues to roll in. Please vote in the polls below, and feel free to share your comments with us, too.