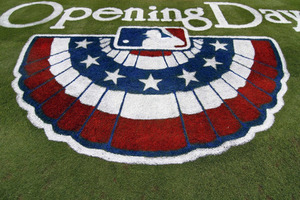 This is no April Fools prank: Baseball. Is. Back!

After the Houston Astros dis–hey…stop laughing…it really happened–dismantled the Texas Rangers last night at Minute Maid Park, we had our first full day of baseball today.

Naturally, ESPN kicked it off with proof that they are extremely stubborn as a network, pitting C.C. Sabathia and the hobbled Yankees versus Jon Lester and the completely average Red Sox.

There were so many amazing moments in a long day of ball that it was hard to narrow down to just five. But here is our best shot at it. This is what we do at Three Up, Three Down. We write stuff on baseball-related activities for your enjoyment. So, enjoy!

Welcome to Atlanta, where the playa’s play and Upton hits bombs like every day. No disrespect to Freddie Freeman, who also went mammo today, but this Justin Upton blast was put in orbit. And it’s not just a top moment because of the distance–the Braves outfield is the most freakish in baseball, and this is just the first sampling. The Braves faithful have been waiting for this moment since the original trade was made, and the little bro definitely didn’t disappoint.

One of KP’s least favorite memories of the 2012 season was any blown save by John Axford and Co. If you see our tallest group member, give him a hug. Because Axford was at it again on Opening Day, giving up a no-doubter with two outs in the ninth to the Rockies’ Dexter Fowler, which tied the game. Fortunately for Milwaukee and the home fans, the Rockies pitching staff is deplorable and Jonathan Lucroy was able to score a walk-off sac fly and bail the bullpen out.

If there was any debate that last year’s NL Rookie of the Year would suffer from a sophomore slump, he killed it quick. In his first two at-bats of the 2013 season, Bryce Harper absolutely crushed two Ricky Nolasco pitches and put them in the right field bleachers. I’m not buying that his second one has landed yet. In fact, it might currently be traveling over the Atlantic Ocean. Keep an eye out for it. The 20-year-old phenom is on pace for 324 jacks this year. 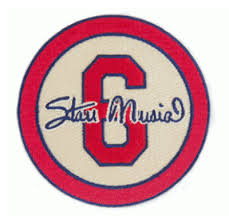 The late Cardinals legend and Hall of Famer Stan Musial is being honored by the team with a cool, classy patch (pictured to the right) on their left sleeves in 2013. But the Arizona Diamondbacks, who hosted the Cards on Opening Day, pulled off a fantastic move by paying homage with a video tribute to Musial between innings. Unfortunately, I don’t have video for you, but the gesture itself was a true act of sportsmanship and remembrance of one of the greatest hitters and humans the world has ever seen.

Let me set the stage: The defending champions travel to their heated rival’s new stadium and face their fancy new team in a battle between two of the best pitchers in the league. A pitcher’s duel turns into a one-man show as Dodgers starting pitcher Clayton Kershaw not only throws a complete game, four-hit shutout, but hits a go-ahead home run that breaks a scoreless tie in the eighth inning. Unbelievable. And in a game that began with a well-choreographed first pitch skit from Dodgers heroes Sandy Koufax and Orel Hershiser. I have to take a second to brag, as humbly as possible. I tweeted THIS about five minutes before magic occurred. Of course it was a coincidence  but it makes me believe in fairy tale endings, and reinforces our love of this magical sport.

Buckle up, baseball fans. This was just day one. Only 161 more regular season games to go! Vote below on which one of these moments should have been in the top five, or comment about any moments we missed!

Yesterday, our Major League Baseball family lost two of its greatest members: Stan Musial and Earl Weaver. Here, we pay tribute to the Hall of Fame player and manager, respectively, for their contributions both on and off the field to this great sport we all love.  Our condolences to their families, friends, and Cardinals and Orioles fans everywhere.

Jeremy on Stan Musial: I was at dinner with my girlfriend (the biggest Cardinals fan in the world) tonight when I got the text that Musial had passed away. Immediately, I was torn — do I tell her? Ruin our date night? After letting the shock subside, I made the right choice. I told her what happened, and held her hand as she sobbed in the middle of the restaurant. Stan the Man wasn’t just a great baseball player. He was a legendary hero both on and off the field. Baseball fans everywhere, especially Cardinals fans, have reason to be devastated this weekend. What we’ve lost with Musial is above the diamond, above the dirt, above the balls and bats and gloves. We’ve lost perfection. The perfect player and person and everything that is right about baseball. As former commissioner Ford C. Frick coined about Musial, …”here stands baseball’s greatest warrior. Here stands baseball’s greatest knight.” Though undervalued as a player, Musial will never be forgotten as a man. And even though, as my girlfriend said through tears, “I feel like I lost a family member. Like baseball died tonight,” the game will live on because of men like Musial. A man who gave his heart and soul to every blade of grass, grain of dirt, and loyal fan that he touched along the way. Rest in peace, Stan.

Bryan on Stan Musial: There are few baseball players that would elicit the type of response upon their passing the way Stan Musial has.  The short list would include Willie Mays, Hank Aaron, and Yogi Berra.  Stan “The Man” embodied the city of St. Louis and was the greatest player to ever play for one baseball’s greatest franchises.  He was the model of consistency with 1,815 hits at home and 1,815 hits on the road in his career, plus a 24-time all-star, three-time MVP and World Series champion.  However, Musial was more than just a Hall of Famer on the field, he was a Hall of Famer off it.  The honor that shows how truly amazing “The Man” was is being bestowed the Presidential Medal of Freedom.  When Musial became just the 8th baseball player to receive the honor, President Barack Obama said “Stan remains to this day an icon untarnished, a beloved pillar of the community, a gentleman you’d want your kids to emulate.”  Stan Musial may be one of the most underrated baseball superstars of all-time, but when I one day teach my future children about the game, “The Man” will be high up on the list of players I would like them to follow in the footsteps of off the field.  For Cardinals fans, he’ll always be at the top.

Jeremy on Earl Weaver: The first time I ever heard of Earl Weaver, I was just a little kid. I’m far too young to remember his managerial days in person, but I’ve always been an avid baseball fan. And I distinctly remember owning an awesome book as a kid about bizarre baseball stories, and flipping to “Earl Weaver’s double heave-ho.” That, of course, referencing the doubleheader in which the hotheaded manager was ejected from both games — a feat Lou Piniella could only hope to achieve. Anger issues aside, Weaver will be remembered for his remarkable success as a big league manager: five 100-win seasons, four World Series appearances (one victory, in 1970), and a career .583 winning percentage that ranks first among managers since 1960. Widely credited for being a brilliant tactician, Weaver was far ahead of his time with defensive fundamentals and the preaching of patience at the plate — he changed the way baseball games were managed forever. Rest in peace, Earl.

Bryan on Earl Weaver: Is there a better known manager all-time than Earl Weaver?  Weaver was a fantastic manager, but his penchant for arguing with umpires makes him a focal point of baseball lore.  My dad has been an umpire for my entire life and would always tell stories of growing up watching Weaver berate umpires and getting ejected only fueling his rage more.  One of my father’s favorite umpires Ron Luciano not once, but TWICE ejected Weaver BEFORE the game.  In my time reading anecdotes about Weaver since his passing, I came across this 1982 Sports Illustrated article about the relationship between Luciano and Weaver.  I’d encourage everyone to read it, to help get a grasp on Weaver’s shenanigans from the view of his biggest nemesis.  Antics aside, Weaver was a great manager, getting the most out of his players , winning  the 1970 World Series, and becoming beloved by the Charm City.  The Orioles will never have a manager like Earl Weaver again, that’s for sure.

Two baseball icons that defined their cities got the call up to heaven.   Each have their numbers retired.  Each have statues outside their home ballparks.  Each with Hall of Fame plaques hanging in the hallowed halls of Cooperstown.  Each will be remembered by baseball fans forever.  Thanks for the memories Stan and Earl.